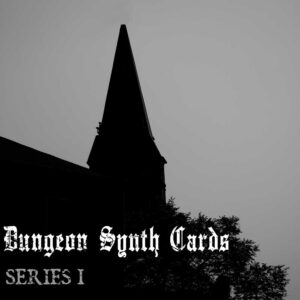 Dungeon Synth Cards is an upcoming series of collectible trading cards being presented by Bard Algol of Dark Age Productions.

The mission is to feature the most thematic and historical promotional photographs and the best visual art from the world of medieval dark ambient music. From it’s genesis as an unaffiliated sub-genre of experimentation in the 1990s black and death metal scene, to it’s current state as it’s own full-fledged music genre almost 30 years later.

Artists both current and no longer active are encouraged to contact us for consideration.